Irish Ferries is one of the largest ferry companies, offering services from Ireland to several destinations in Wales and France. The company was founded in 1973 as Irish Continental Line, operating one ship on the Rosslare to Le Havre route. In 1992, the company acquired the British and Irish Steam packet Co. which allowed them to operate on several other routes. 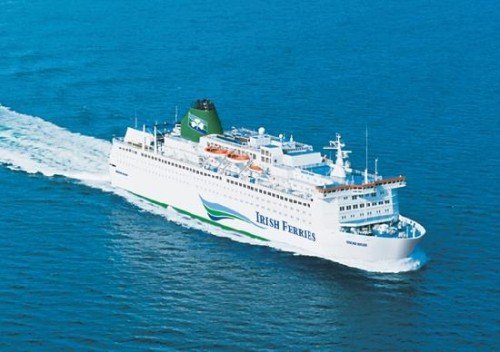 The company is also committed to doing as much as possible to help the environment, and recent steps have included using non-toxic paint, buying supplies in bulk, and collecting waste oil. The Irish Ferries fleet is one of the most modern and efficient on the sea, and transports thousands of holidaymakers to and from the Emerald Isle every year.

Although times can vary by season, the company offers up to 12 crossings daily between Ireland, the UK and France. The fastest crossing is on the Dublin to Holyhead ferry route; the company’s Jonathan Swift takes just less than 2 hours. There are two crossings daily between Rosslare and Pembroke, in South Wales, and the crossing takes about 4 hours.

The journeys to and from Roscoff and Cherbourg are overnight crossings; typical journey time is between 16 and 18 hours. Rosslare makes a convenient gateway to the southeast of Ireland, with easy road access to Dublin, while Cherbourg offers easy access to Paris, the north of France, Germany and the Netherlands. Irish Ferries offers a range of fares, special offers and promotional packages on travel throughout the year, as well as deals on self catering holidays in France.

The company’s fastest ship, the Jonathan Swift offers several bars and restaurants, a TV room and shopping, while the Oscar Wilde, which sails to France, is one of the most luxurious ferries at sea.

Passengers can choose from a wide range of cabin options, several cafes, bars and shops and a children’s entertainment area. All Irish Ferries offer free Wi-Fi, expedited boarding, club class upgrades and facilities for the disabled. The company also offers fast and easy check in, with required times for foot and car passengers ranging from just 30 minutes to an hour.

This website uses cookies to improve your experience while you navigate through the website. Out of these, the cookies that are categorized as necessary are stored on your browser as they are essential for the working of basic functionalities of the website. We also use third-party cookies that help us analyze and understand how you use this website. These cookies will be stored in your browser only with your consent. You also have the option to opt-out of these cookies. But opting out of some of these cookies may affect your browsing experience.
Necessary Always Enabled

Any cookies that may not be particularly necessary for the website to function and is used specifically to collect user personal data via analytics, ads, other embedded contents are termed as non-necessary cookies. It is mandatory to procure user consent prior to running these cookies on your website.