Along with the Dublin Port ferry terminal, the Dun Laoghaire ferry terminal is a popular gateway to and from Ireland. The terminal is located about 8 miles southeast of Dublin city centre and is easily reached by the Dublin light rail system (DART) as well as several bus routes. During peak times, DART trains run every 15 minutes, and connect to the city’s main rail and bus stations.

The nearby M50 connects the terminal with Dublin Airport, and pay and display parking is available at Dun Laoghaire, with the option for frequent users to buy a quarterly or yearly parking pass.

The Dun Laoghaire ferry terminal is used by Stena Line, which operate their high speed ferry from the port to Holyhead, on the isle of Anglesey in Wales. The fastest crossing takes just over two hours, and ferries operate year round; the companies other ships take between 3 and 4 hours between Ireland and Wales.

Although daily schedules vary throughout the year, the earliest crossing from Ireland is typically at 2am; the latest one at 9pm. Facilities on board the Stena ferries include bars, restaurants, comfortable seating and Wi-Fi. Other onboard activities include an observation deck, children’s play area and shopping. 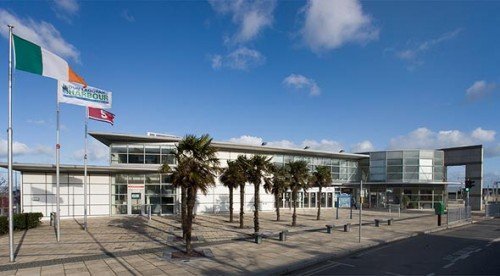 Dublin Bay Cruises also offer daily seasonal service between Dun Laoghaire and Howth, offering easy transportation between the two places, as well as some great views of the bay and the port.

Just like the ferries, the terminal at Dun Laoghaire is modern and efficient, and has been purpose built and designed with the efficiency of an airport in mind. The terminal has a reservations and ticketing desk, vending machines offering snacks and drinks, and free Wi-Fi for waiting passengers.

If you are looking for a cheap ferry to Dublin then compare our low cost deals today.

There are also toilets for the disabled and staff assistance for anyone who needs extra help, as well as baby changing facilities. The nearby town of Dun Laoghaire itself has plenty of places to eat and drink as well as accommodation to suit all budgets, and the resort also offers some great sailing, fishing and golf. Dublin, with its world class attractions, shopping and museums, is a few minutes away.

This website uses cookies to improve your experience while you navigate through the website. Out of these, the cookies that are categorized as necessary are stored on your browser as they are essential for the working of basic functionalities of the website. We also use third-party cookies that help us analyze and understand how you use this website. These cookies will be stored in your browser only with your consent. You also have the option to opt-out of these cookies. But opting out of some of these cookies may affect your browsing experience.
Necessary Always Enabled

Any cookies that may not be particularly necessary for the website to function and is used specifically to collect user personal data via analytics, ads, other embedded contents are termed as non-necessary cookies. It is mandatory to procure user consent prior to running these cookies on your website.